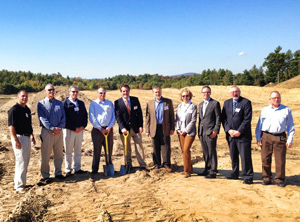 According to Business NH Magazine, the Town of Londonderry is "poised to become an economic powerhouse." And with an inspiring town motto, “Where “Business is Good. Life is Better," Londonderry is ready to make it happen.

Home to just over 24,000 residents, the Town of Londonderry is known for its apple orchards and farming heritage, and the headquarters to the nationally-known company, Stonyfield Farm as well as the state’s second largest power plant, Granite Ridge Energy.  Few know that a major portion of Manchester-Boston Regional Airport lies within the town’s boundaries, an area that has been designated as the community’s industrial enterprise zone. By June 2015, Londonderry will welcome over one million square feet in new major corporate logistic and distribution centers for UPS/Pratt & Whitney, FedEx, and Milton Caterpillar.

According to site developers, Londonderry Town Manager Kevin Smith and the Town Hall development team have played a critical role in making these economic advancements possible, working diligently to obtain, in just a few months, approvals and Development Agreements for these three large sites and buildings.

“This project remained dormant for over a decade,” explains Smith, who became town manager just under a year ago. “But I knew a lot about it and started talking to the landowners and a few developers, trying to find why this was not getting off the ground and what was stalling it. Like a puzzle, we began putting the pieces together.

Stuart (Arnett) and I met with the landowners and we saw that there were mitigating but solvable factors we were previously unaware of, so we started tearing down some of the barriers to the project. To get ready, the community paid for the area to be engineered, and worked with the NHDOT on the new access road.”

“We were able to bring all the pieces together rather quickly. The town agreed to provide the sewer infrastructure. Manchester Airport, the Army Corps of Engineers and the FAA took care of details for a needed land swap.”“I am glad it’s finally happening after all this time. We are not only getting the long-discussed Pettingill access road built, but at no cost to the taxpayers. This was originally called for to be $12 million dollar public project. Now it is mostly being paid by private funds.”

According to Smith, it’s more than just about funding. “UPS will be assembling jet engine kits for jet engine manufacturer, Pratt Whitney, at its new 600,000 square foot facility. The company will also use it as a showcase and plans to bring in clients to MHT.  They will offer up to 500 new jobs. Fed Ex is now building a 300,000 square foot distribution center and creating 250 new jobs. Milton Caterpillar ‘s new 100,000+square foot space will serve as both retail and a warehouse, providing 125 new jobs. 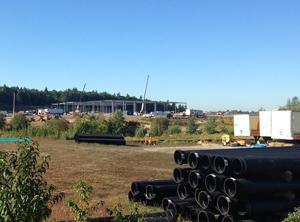 “After these are completed, further expansion can be expected,” adds Smith. “There are still 500-600 acres left to develop, so we do anticipate additional projects at the airport, all providing additional tax base for the town and jobs for the state.”

“All is going according to plan. In addition to the new jobs and the tax base, these logistics centers will provide needed activity for Manchester-Boston Regional Airport without large increases in traffic that could have resulted from residential or retail.  This alsocompliments nicely Londonderry’s other mixed use areas, such as the permitted Woodmont Commons PUD.”

“We are very fortunate to be in a great location,” says Smith. But being ready with plans, engineering specs, and having the Tax-Increment Financing (TIF) District already in place was key. And our responsive development team was willing to seek ways to make these quality projects succeed.”